We have a number of original oil paintings by Brian Shields available and on display in our gallery which is based in the beautiful rural location of Mawdesley, Lancashire.

Brian Shields was born in Liverpool in 1951. He was one of twelve children to his Mother and Father Dennis and Agnes Shields. By all accounts, Dennis was an accomplished artist but having twelve children was unable to provide for his family by painting alone, he worked as a docker in Liverpool to support his family. Brian demonstrated his artistic talent from an early age, his school friends nicknamed him ‘Braaq’ a misspelling of the 20th century French master ‘Georges Braque’.

Brian held a number of successful exhibitions from 1974 and in 1977 he held solo exhibitions in London’s west end, the north of England and a sell-out show in the Lake District. The Times newspaper was running an article on Brian and described him as one of the most successful British artists in England at that time. The Hibbert Brothers Art Gallery established in 1834 held a solo exhibition of Brian’s work in 1976. Carnes Fine Art are offering a piece titled ‘She’s Not Getting This Back’ which was exhibited and purchased from the ‘Hibbert Brothers Brian Shields exhibition’ in 1976. Accompanying this painting is the original purchase receipt priced at £300 along with the Hibbert exhibition catalogue. More details about this painting are available on our website.

Brian unfortunately passed away of a brain haemorrhage in 1997 at the premature age of 46. He left behind a painting legacy that sits proudly alongside his contemporaries of the Northern art scene and artists of his generation. His memory continues to live on through his much-adored paintings. In 2014, one of Brian’s paintings titled ‘Does this mean there’s no Dinner Now’ hammered down at auction for £56,000. Interest in Brian’s work remains strong and Carnes Fine Art is delighted be able to share a small part of his incredibly journey. To find out more about our collection of works, please contact the gallery on 01704 822533 or call into the gallery for a coffee and a chat about all things art. A warm welcome awaits. 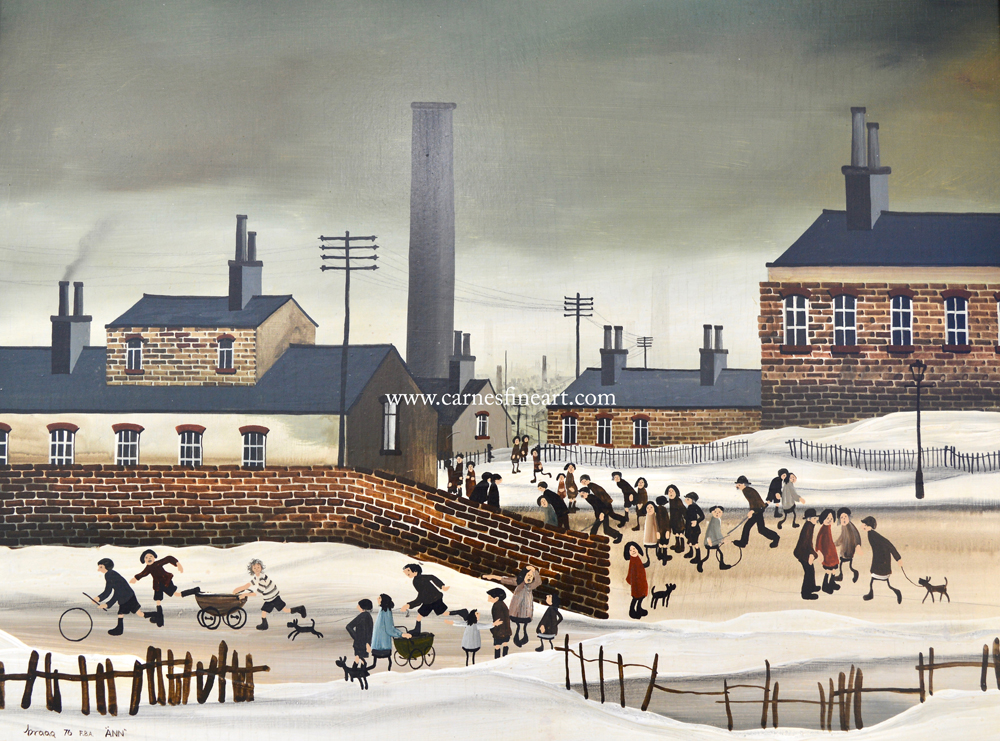